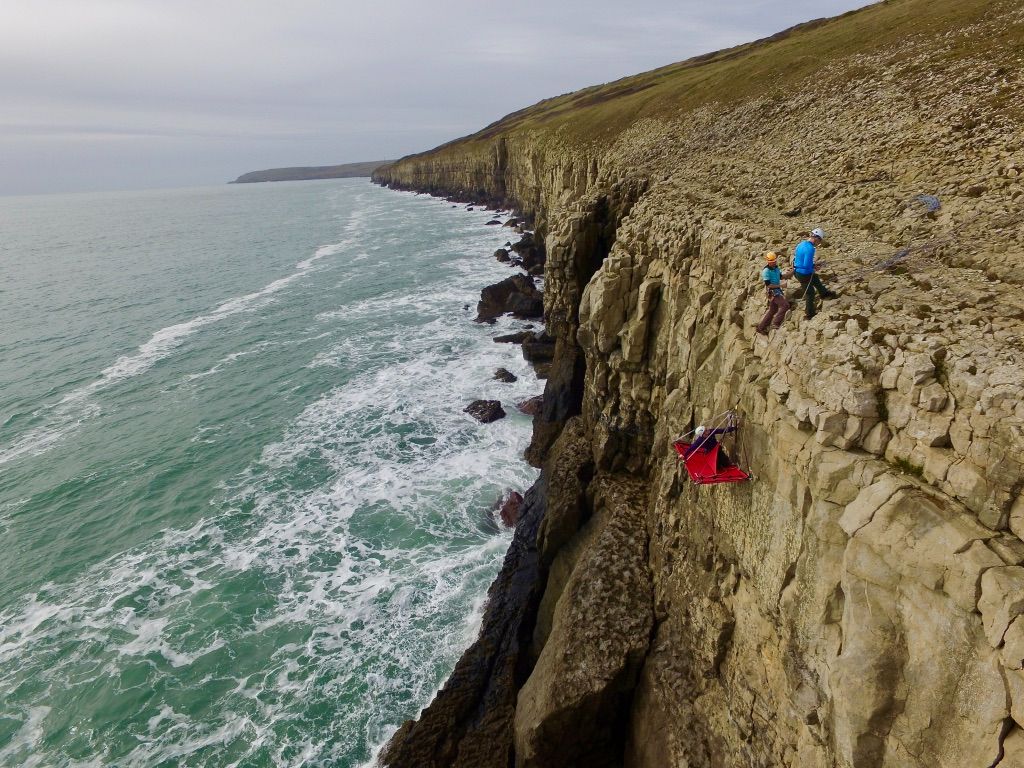 Cliff camping – sleep in the wild in a portaledge tent

Afraid of heights? You may want to look away now. Cliff camping, as the name suggests, is a far cry from a night spent in a cosy tent in a grassy meadow.

Cliff camping is the extreme sport of sleeping on a portaledge: a small hanging tent strung up to a sheer mountain face. Spending the night is one of these suspended platforms is camping with a massive dose of adrenaline thrown in.

This rather hair-raising way of getting a good night’s kip was once the sole territory of experienced multi-day climbers, who would use portaledge tents as a way to rest when scaling enormous mountain climbs in America.

It all began in Yosemite National Park in the 1980s; hardened climbers attempting to scale the iconic mountain faces of El Capitan and Half Dome would haul army cots they’d pinched from the national park’s bunkhouses up the cliffs with them. It may not have been a very safe way to sleep in between climbs, but it was better than the old-fashioned habit of simply slinging a hammock up from carabiners clipped into the rock.

These days, portaledge designs are rather more sophisticated and a million miles safer and sturdier then their early incarnations, and there’s no need to travel to California or to be a pro climber to try a night on the edge, either – Britain’s wild coastal cliffs are the perfect place for the brave to give extreme sleeping a go.

Climbing and coasteering instructor Eddy Young runs Young’s Adventure Solutions in Dorset, and takes advantage of the miles of glorious cliffs at Swanage to let daring campers experience the thrill of sleeping on high for one night. When we met him on the cliff edge, ready to take the leap, a tiny portaledge was just visible, anchored to the rocks below Anvil Point lighthouse. Far below the little platform the sea crashed angrily against the rocks, but we plucked up courage, got kitted up in climbing harnesses and gingerly abseiled down to the platform.

Standing feels extremely precarious, but sitting or lying on a portaledge is actually pretty comfortable. It’s totally safe, too – you wear your harness at all times, even to sleep, and are tied to both to the tent and the wall itself. A reassuring thought, even if your brain is constantly fighting between knowing it’s perfectly safe and panicking at the sight of the empty space and growling waves far below.

At first glance a cliff side might seem a bare and barren place to spend the night. But after a few minutes on the portaledge the local seabirds must have decided that their strange new neighbours didn’t pose a threat, and we watched gulls and guillemots diving and gliding right at eye level and scanned the ocean for the sight of a seal or a porpoise in the shallows.

Nightfall was best of all. After a spectacular sunset a sky full of stars glimmered above us – the lack of light pollution on Swanage’s coast means you can spot myriad constellations and distant planets above you as you lie on your back, with no tent ceiling to get in the way. And the calming swish of the ocean lapping on the rocks quickly takes away any fear – instead there’s just delight in sleeping in a little secret space in the wild, far from the madding crowds.

A one-night cliff camping adventure with Young’s Adventure Solutions costs £250 per person for two people, including dinner, breakfast and all equipment.